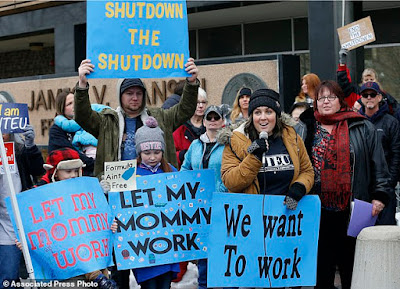 Friends, I'm back from my travels, and I can report one thing for sure: it's warmer in the Caribbean than it is in Western New York.  Arguably, though, this is old news, so let's move on to current events...

The shutdown grinds on.  This isn't a big surprise, because the Democrats seem determined to prevent President Trump from scoring a political victory on the Wall.  In the short term, it appears that more Americans blame Trump for the shutdown than blame Congressional Democrats -- hardly shocking, given the media's anti-Trump hysterics.  Support for the Wall is up, however, and Trump shows no sign of cracking.  Good!

You may have heard that some conservatives are urging President Trump to declare an emergency at the border, and appropriate funds for wall construction based on his emergency powers.  That would invite a lawsuit, naturally, but since everything Trump does or says incurs the wrath of leftist lawyers, the idea has merit and should be strongly considered.  Would a future Democratic President potentially misuse his own emergency powers?  You bet!  But he/she will do that anyway, so in my view Trump should do whatever it takes to build the Wall.  The ideal, of course, is a legislative solution.  We needn't give up on Plan A, therefore, at least not yet.

Below you'll find a Washington insider's perspective on how the shutdown may make streamlining government and firing useless bureaucrats somewhat easier.  His arguments are persuasive.  Assuming Trump's poll numbers hold reasonably firm -- and so far the movement has been slight -- there may be some very good (unanticipated) reasons to keep the shutdown going.  I say: stay the course, Mr. President!