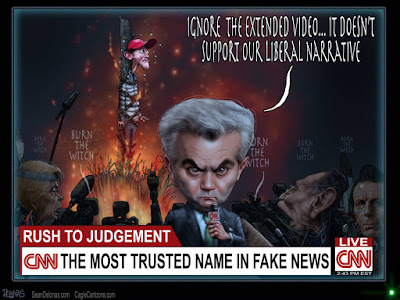 Friends, there aren't many better examples of the sheer viciousness of the modern Left (and the liberal media) than the way it treated Covington Catholic High School student Nick Sandmann -- for having the gall to stand there and smile as a Native American activist banged a drum aggressively in his face.  The rush to judgement on these white, male, Catholic teens was something to behold, and we can take some satisfaction in the fact that at least a few leftist commentators have backtracked on their criticism.  Nonetheless, this episode should set off alarm bells regarding how reflexively venomous -- and racist! -- the Left has become.

We talk about all this on this week's Newsmaker Show, as well as Brexit, the "big government" political legacy of the Lyndon Johnson administration, and more!

You may also want to take a peek at this superb piece of investigative journalism that examines one of the most successful con jobs in history: the Democrats' effort to frame the Trump campaign for collusion with Russia.