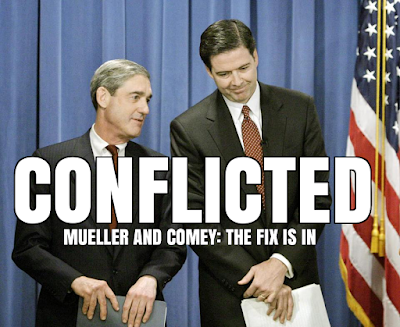 Friends, the tea leaves are starting to align, and we may finally be approaching the end of Robert Mueller's inquiry into "Trump-Russia collusion".  By and large, that's good news, since this nonsense has been hanging over our Fearless Leader for almost two whole years.  My sense is that there's very little indication that Mueller has found anything close to "collusion" between the Trump camp and Russia.  In fact, his vindictive attacks on Trump associates like Roger Stone are more a sign of weakness than of strength.  That doesn't mean Trump is out of the woods, however.  Mueller could still try to make a case that Trump has lied or obstructed justice.  Both crimes can be opportunistically defined.  Luckily, whatever Mueller and his liberal prosecutors whip up will be sifted through the filter of the acting Attorney General, or possibly Attorney General Barr, if he's confirmed in time.  I suspect that Mueller, in the end, won't be capable of delivering the goods, and "the goods" means ending the Trump presidency, which has always been the goal of the Dems and the deep state.

This poll about the Mueller investigation bears out my thinking.  Whatever Mueller produces, many Americans will suspect his motives and will doubt his fairness.  That's all to the good for President Trump.

In other news, the deficit continues to be alarmingly high.  President Trump's stewardship of the economy has been good overall, but his free-spending ways, combined with his tax cut, have put us in a tight spot, fiscally speaking.  Of course, voting for Democrats is no answer: they'll spend money like it's going out of style.  My concern is...what happens if we have a recession?  Deficits are already high -- how much higher can they go???