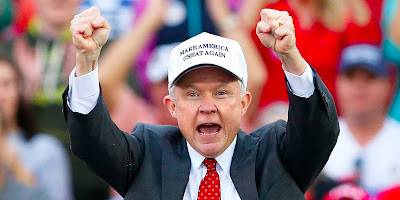 Friends, many of you have expressed disappointment in Attorney General Jeff Sessions, who has so far refused to appoint a special counsel to investigate FISA abuses, the phony inquiry into Hillary Clinton's emails, and FBI/Deep State collusion against the Trump campaign.  I too find Mueller's microscopic investigation of Trump/Russia "collusion" and the "hacking" of the 2016 election, coupled with the lack of focus on the misdeeds of Clinton supporters, very frustrating.  Perhaps, though, just perhaps, Sessions is playing a long game here.  Maybe he wants to set the stage (methodically) for a second special counsel and ultimately hold the left accountable.  Maybe he believes that prosecutions need not come out of a special counsel.  Maybe he's got a slow metabolism.  Who can say.  This article, though, makes the case that we shouldn't condemn Sessions out of hand.  Maybe, in fact, a thorough investigation of these leftist outrages is already underway -- but we simply don't hear about it in the media, because a) the media doesn't care, and b) unlike Mueller's team, the team(s) investigating Clinton, the FBI, the Democratic Party, etc. don't leak like a sieve.  In any case, it pays to consider what this man has to say:

In other news, will the U.K. soon introduce a waiting period and a licensing system for those who wish to buy cutlery?  Stay tuned...