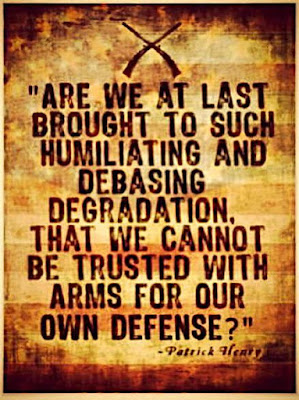 Friends, leftists are smart, as they never tire of reminding us.  They're very good at achieving their aims, and by no means is the ballot box the primary means they employ.  They have our education system, the media, Hollywood/popular culture, the courts, and very often corporate leaders on their side.  How did we go from a nation that wouldn't tolerate "gay marriage" and which consistently voted against it, to one in which gay marriage is the law of the land and the media won't even dignify opposition to it as a defensible position?  It wasn't "democracy".  It was a subtle and gradual recasting of the issue in the media, and a steady erosion of support for traditional marriage in corporate America and the courts.  Drip, drip, drip -- and, before you know it, everything has changed.  The lesson is simple: we cannot assume that, just because Republicans win elections, the left has been contained.  Far from it.

On the question of gun rights, Tucker Carlson has exposed yet another leftist tactic to undermine the 2nd Amendment.  He's right -- denying loans to companies that manufacture guns may in the end prove more destructive to your gun rights than any incremental change in the law ever could be.  Corporations, including banks, are led by men (and very occasionally women) who often share a social/cultural worldview with liberal elitists.  In addition, corporations are scared of liberal activitsts, who use assorted bullying tactics, including social media campaigns, street protests, and boycotts, to pressure them to tow the line.  Don't underestimate the power and importance of these tactics!  If conservatives don't learn that "the squeaky wheel gets the grease," then they better get used to losing, because that's what will happen.

Here's what Tucker had to say: