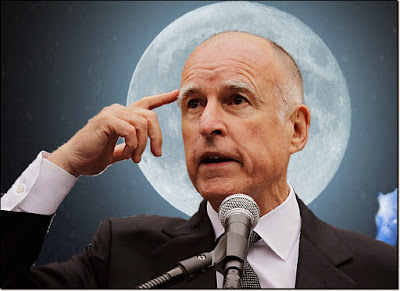 Friends, my latest article, well, must be read to be believed.  I wrote it at the intersection of Californian lunacy, illegal immigration, and women's and transgender rights.  Intrigued?  So was I!  Enjoy...

By now the American people are well-accustomed to the unmitigated kookiness that emanates from the Golden State, a.k.a. California. Governor Jerry Brown, affectionately known as “Moonbeam,” is naturally entitled to be recognized as Bedlamite-in-Chief, and he seldom disappoints in terms of the absurdity of his remarks, which is to say nothing of his policies (the less said about these, the better).

Recently, Governor Brown uncharacteristically agreed to President Trump's request that troops of the California National Guard be deployed to assist in enhancing security along our country's border with Mexico. He was careful to observe that these National Guardsmen would not be used to enforce immigration laws, however – they would instead focus on other criminal activity on or near the border, including drug smuggling and human trafficking. "This will not be a mission to build a new wall," Brown declared. "It will not be a mission to round up women and children or detain people escaping violence and seeking a better life."

The proviso “It will not be a mission to round up women and children” passed without any great furor in the press, but it is precisely this throwaway remark that I wish to analyze, because it cuts to the quick of casual Democratic/leftist bias on matters of sex/gender, and as such it merits our full attention.

The only possible interpretation of Governor Brown's remark is that any immigration policy that leads to the “rounding up,” i.e. detention, of “women and children” is wrong, or at least highly suspect. Consider that attitude and its implications. If children are not to be “rounded up” at the border, what this means is that all children worldwide have what amounts to an entitlement to U.S. residency. Already, children are entitled to preferential treatment upon their apprehension by immigration authorities, based on the protections they receive under U.S. law, but no law currently on the books insists that it is out of bounds to detain children, or to deport them. Governor Brown is making such a claim, albeit not on legal but presumably on moral grounds. Undoubtedly, this will be an encouragement to children who may be considering hopping the border. After all, Jerry Brown is saying that, not only are they presumptively entitled to residency, but even to detain them, or to impede their passage into the United States, is unacceptable. Extraordinary.

Governor Moonbeam goes further, however, and opines that “women and children” (emphasis added) should not be “round[ed] up”. Now, in doing so, it must be noted that Brown is using a time-tested formula, “women and children,” which presents these two categories together, based on the historical assumption that they are vulnerable and thus deserving of greater protection than that offered to men. “Women and children first!” was one of the last announcements that many passengers on the ill-fated Titanic heard. Its officers and crew were following the then standard practice of offering places on lifeboats first to women and children, and only later (if some places remained) to men. This was an act of chivalry, as well as an observance of the “Cult of Domesticity,” which seemed entirely appropriate at the time, but it cannot be denied that the ideology that undergirded it was patriarchal. Why should women receive places in lifeboats before men? Because women were presumed to be the “weaker sex,” and it was men's duty to protect them. In our allegedly more enlightened age, such an attitude would ordinarily be considered patronizing at best, and sexist at worst, but Jerry Brown invokes it without batting an eyelash. Presumably, he does so because he knows that, as a liberal Democrat, he can be as racist or as sexist as he likes, without meaningful consequence to his reputation. In any case, Brown is certainly not the first Democrat to dust off this patriarchal trope and deploy it for leftist purposes, but his invocation of the old attitude is one of the more arresting modern examples, simply because of its sweeping policy implications.

For, lest we forget, liberals no longer consider gender a fixed category, as certainly the officers and crew of the Titanic did. One's “gender identity” in this day and age, according to the left, is purely a matter of personal preference. To put it another way, Governor Brown presumably meant to say that the California National Guard would not “round up [people who identify as women] and children”. We will give him the benefit of the doubt and assume he was saving time by referring only to “women,” but, as a believer in transgender rights, it is inconceivable that he meant to exclude those who are transitioning, or have transitioned, or may someday transition, to femininity.

Consider, then, the full implications of Governor Brown's reimagining of immigration law and policy. The deportation of “[people who identify as women] and children” is unimaginable; even to detain them is abhorrent. Therefore, what is to stop anyone, anywhere on the globe, from relocating himself/herself/?self to the border and surrendering to the Border Patrol? If this imaginary “immigrant” had the misfortune to be born a man, this presents little difficulty, because he could simply redefine himself as a woman. Could this be seen as opportunistic? Surely, but the left has made its position clear: no legal or social standard can be imposed that limits a person's ability to define, or redefine, their own gender identity. Presumably, therefore, our imaginary male/female immigrant could, if he/she wished, reacquire his masculinity after receiving permanent residency. Why not? Not that we would count this as likely, however. After all, since Jerry Brown and people like him have already decided that men ought to possess inferior rights, who in his/her right mind would willingly embrace manhood, when there are so many more attractive categorizations, including femininity, at hand?

In such a way, Governor Brown may have found the silver bullet that can produce the abolition of all policies of border enforcement. Indeed, he may have found the formula for the left to eliminate international borders and men simultaneously! Brilliant! The world will never be the same.

You can also find the article at Townhall.com: