The Future of the Electoral College 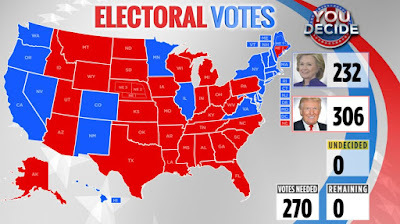 Friends, I recommend this very interesting article about the electoral college, and whether or not Republicans can rely on winning it, even if we lose the popular vote.

Now, personally I support the electoral college.  I do so partly because I support states' rights, and the college gives states an important role in selecting the President.  I also wish we would go back to allowing state legislatures to pick U.S. Senators, but that's a battle for another day...  Now, the gist of this article is the idea that, if Republicans increasingly rely on the electoral college to win Presidential elections, but steadily lose support in the popular vote, the legitimacy of Republican rule will be questioned.  I disagree, and for one overpowering reason: Trump-haters hate Trump, yes, and the Left hates the Republican Party, but frankly the fact that Trump won the electoral college and lost the popular vote is THE LEAST OF THEIR CONCERNS.  Collusion, emoluments, strippers -- you name it, they'll take any excuse to criticize, delegitimize, and hopefully destroy President Trump.  Increasingly, this kind of bare knuckles politics is common in the trenches too -- at the level of House, Senate, and even state and local elections.  To put it simply, more and more often, the two parties and their adherents have no respect for one another or for the "process".  They want to WIN, and they don't care how they do it.  Thus, in my opinion, just as it's unlikely for any real change in the electoral college to occur, it's also beside the point.  American politics has gotten ugly, and it will stay that way, unless and until the media environment, which stokes these animosities, changes.  In short, OF COURSE the legitimacy of Republican rule will be questioned.  Get used to it, because it will happen regardless of who wins the popular vote and/or the electoral college.

My belief is that the electoral college does, in fact, benefit Republicans, and it is likely to help our candidates win Presidential elections, just as the two-Senators-per-state formulation is likely to help us keep control of the Senate.  We could move to a system more oriented towards the popular vote, yes, but since this would only help the Left, which I do not see as devoted either to democracy or the U.S. Constitution, I don't believe this would be sensible or proper.  I say, therefore, keep the electoral college in place, and keep the presidency, the Senate, the House, most governorships, most state legislatures, and above all most judgeships, in safe, Republican hands.  The alternative is...bleak, to put it mildly.
Posted by Nicholas Waddy at 12:41 PM