More Grist for the Mill 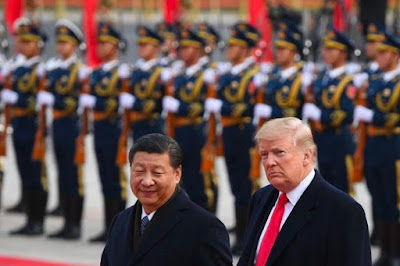 Friends, President Trump's attitude towards China has been somewhat ambiguous of late, and perhaps purposefully so.  He wants to send the message that we can and will have a positive relationship with the Chinese, but he also wants to keep the pressure on China's government, so that, when we strike a deal, it will be the best possible deal, from the U.S. perspective.  Put simply, he wants to be tough, and yet he also wants to be conciliatory.  As he walks this tightrope, his key advisors are pulling him in opposite directions.  This article will give you some insight into where we stand.  My hope is that President Trump will ultimately go to the mat with the Chinese and force them to make major concessions.  As the saying goes, sometimes you have to be cruel to be kind, and I believe in the long run our relationship with China will be much stronger if we set the right tone now and prove to them that we will not be pushed around any longer...

The second article I would like to recommend is about the consistent liberal/mainstream media bias on race.  Not only do leftists feel entitled to be blisteringly racist themselves (hating white people is just common sense, after all), but they also report the news about race in very selective ways.  In a nutshell, if a story about race supports the narrative of the evils of white racism, then it gets blanket coverage.  If it doesn't, it will often be swept under the rug.  In this way, and in so many others, we are poorly served by the journalistic community.

https://townhall.com/columnists/bernardgoldberg/2018/05/29/the-racism-liberals-dont-recognize--their-own-n2484478
Posted by Nicholas Waddy at 12:29 AM