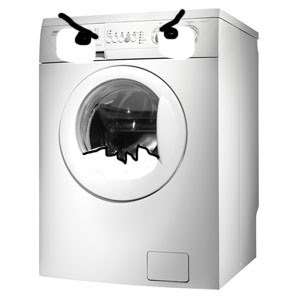 Some of you may recall that, months ago, I wrote about the need to impose tariffs on imported washing machines.  Samsung and LG have been dumping these machines in the U.S., trying to destroy their American-based competitors.  Here is the original article:

Now the Trump administration is taking action.  Tariffs have been imposed to protect U.S. producers of solar panels and washing machines, who are being illegally harmed by unfair foreign competition.

This is not just a good idea, in and of itself, but it also sends a strong message to Canada and Mexico that they should take the U.S. seriously as we renegotiate the terms of NAFTA.  It also puts China on notice: the conciliatory line that the Trump administration has taken thus far, to motivate the Chinese to put pressure on North Korea, may not last forever.  Here here!  Let's not allow foreign governments and companies to take advantage of us.  Free and fair trade, yes, but when governments keep U.S. exports out, and maneuver to flood the U.S. market with subsidized foreign goods, it's time to say: NO MORE!  Well done, Mr. President.  This is a good first step.
Posted by Nicholas Waddy at 4:35 PM