Waddy is Righter than EVER!!! 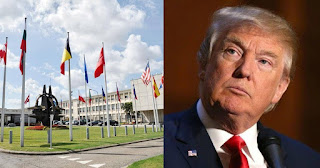 Behold, my latest article, coming soon to The Daily Caller!  It's about President Trump's desire to reimagine our relationship with the North Atlantic Treaty Organization (NATO), which, as you will see, I believe is long overdue.  I'll post a link to the article as soon as it's published online.  "Waddy is Right" is going national, my friends!  This is just the beginning...


On NATO, Trump Gets It Right

On May 25th, President Trump, during his visit to the headquarters of the North Atlantic Treaty Organization (NATO) in Brussels, Belgium, sharply criticized our European allies for, in effect, freeloading off the military dominance, and the military spending, of the United States. This is an accurate analysis, since only 4 of the 26 European countries in NATO currently spend the minimum level of GDP, 2%, judged by the organization itself to be sufficient to meet their obligations. (The U.S., by contrast, spends 3.5% of GDP on defense, and its defense budget roughly triples the spending of all other NATO countries combined.)


Moreover, the U.S. faces most of its military challenges in the Middle East, and European countries consistently lack either the will or the capability to contribute meaningfully to those missions. Ergo, Europe continues to rely on the United States to provide for its collective defense, but it fails to spend adequately to supplement and support U.S. forces, and it fails also to support U.S. operations elsewhere in the world, even when those missions are clearly relevant to European security (e.g. the struggle against ISIS). In a nutshell, the U.S. pays to defend Europe, and gets little or nothing in return.


Those who favor a continuation of this ruinous policy do so largely because they are stuck in a Cold War mentality, and, indeed, during the Cold War NATO made excellent sense to all of its member states, including the U.S. NATO's core mission was and is collective defense, achieved by Article 5 of the North Atlantic Treaty, penned in 1948-49 at the start of the Cold War. Article 5 states that, if a single NATO country is attacked, all NATO countries will respond as if they were themselves attacked, and consequently rush to the rescue. During the Cold War, this meant that, if the Soviet Union attacked any country in Western Europe, all of Western Europe, plus the United States and Canada, would go to war with the Soviet Union. Whether this pledge was genuine or merely a bluff, it succeeded in preventing Soviet aggression. And, in the tense atmosphere of the Cold War, although the United States bore the primary burden of defending Europe against Soviet assault, most NATO members took their defense obligations seriously and maintained militaries that could credibly have assisted U.S. forces. They also sometimes contributed substantially to anti-communist military operations around the world – during the Korean War, for example. In short, during the Cold War, NATO imposed great burdens and risks on its members, but those burdens and risks were shared, and no one disputed the seriousness of the challenge posed by communist aggression.


Today, though, the Soviet Union no longer exists. For those panicked by the latest upsurge of Russophobia (or, for the John McCains of this world, for whom Russophobia has always been a way of life), this may seem like a hollow declaration, since Russia still possesses powerful military forces, and has proved willing to use them against several of its neighbors. The fact, though, is that no country on earth, including Russia, poses a threat to Europe in any way analagous to that of the Soviet Union. European countries have the human, technological, industrial, and economic resources to defend themselves, with ease, from any credible enemy – and yet, unsurprisingly, they choose not to do so, because the United States continues to provide Europe with a blank check in the form of a security guarantee.


Europe's position is understandable, as is American resentment of European freeloading, but what is different about the Trump administration's position is that, 1) President Trump is pointedly insisting that European countries boost their defense spending, and 2) Trump has not explicitly endorsed Article 5 and the concept of collective defense. In other words, he is being cagey about whether, if a European country was attacked, the U.S. would uphold its treaty obligations and use armed force to assist it. He has not disavowed the North Atlantic Treaty, but he seems to regard its obligations as reciprocal – and therefore contingent on European nations paying their fair share. (They seem to be minimally receptive to this demand.) One can naturally criticize the message this policy sends to potential aggressors, since it calls into question NATO's reliability, but the only alternative is for the U.S. to fund Europe's defense indefinitely and without conditions. Surely, this is unacceptable. Something has to give.


For diplomatic reasons, President Trump has backed off the claim he made during the campaign that NATO is “obsolete,” but in many ways he was right. NATO was founded based on two presuppositions: that Europe's freedom was in imminent jeopardy, and that Europeans were incapable of defending that freedom by themselves. Neither of these assumptions holds water today. Thus, we should applaud President Trump for pushing NATO members to rethink their roles and obligations. His message may not have been a popular one, but it is ultimately in the best interests of Americans and Europeans to heed it.

Posted by Nicholas Waddy at 6:04 PM