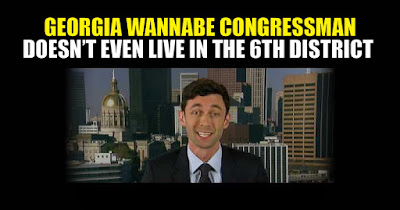 Behold, my latest article, which addresses the upcoming special election in Georgia on June 20th, which will be a key test for whether Republicans are holding onto their base, despite the relentless attacks on President Trump.  Expect it to appear soon in a newspaper near you -- and I'll keep you posted on its fate, needless to say.

On June 20th, a runoff special election will be held in Georgia's 6th Congressional district, featuring the Democrat Jon Ossoff and the Republican Karen Handel. Democrats are pouring money into the race in record-shattering amounts (as much as $50 million may ultimately be spent) in order to boost Ossoff and in turn their false narrative of a country united in its opposition to President Trump and Republicans. This is just one of many reasons why Republicans nationwide need to do everything in their power to defeat Jon Ossoff and keep Georgia's 6th district in responsible conservative hands.


Jon Ossoff is, on the face of it, a strong candidate: he is young, articulate, media-savvy, and cultivates a moderate image. He is also, however, a protege of Nancy Pelosi and a confirmed liberal. If elected, he will support the same big government, politically correct, socially “progressive”, and hysterically anti-Trump positions that the rest of the Democratic Caucus in the House of Representatives seems to have fallen for – hook, line, and sinker. He will thus be a member-in-good-standing of an avowedly disloyal opposition that seeks to obstruct President Trump's agenda and, if possible, overturn the election that placed him in office.


It's not just rich Democratic donors in San Francisco and New York City, and liberal politicians in Washington, D.C., who are supporting Ossoff, however. Hollywood has made its position equally clear. Samuel L. Jackson, in a radio message, referred to the “great vengeance and fury we have for this administration” in encouraging voters to back Ossoff. Ossoff's list of prominent contributors and supporters in Hollywood is, unsurprisingly, a long one. George Takei tweeted about the first round of voting in April: “Vote tomorrow if you're in GA 6th! Let's #UndoTrump”.


And that, after all, is what the Georgia special election is all about for liberals. For them, “undoing” the Presidential Election, which they lost, has become an obsession. Of course, if Democrats won a single special election, that wouldn't make President Trump go away – not by a long shot – but it would wound him and his party. More importantly, it would give Democrats a sense that they had finally “turned the tide” by electing a liberal in a district that was once safely Republican (but which voted for Trump over Clinton by just one percentage point). Undoubtedly, the mainstream media would agree, and it would spin an Ossoff victory as the leading edge of a Democratic surge and a Republican collapse. For this reason, more than any other, Republicans must get behind Karen Handel. She is, by all accounts, a solid, conservative, experienced candidate who would serve our country well. More importantly, though, she isn't Jon Ossoff, and she isn't an obstructionist, conspiracy-flogging, Trump-loathing Democrat, and that should be all Georgia voters need to know.


In the end, the stakes in Georgia's special election are simple: Do we want the American people, voting based on their interests and their values, to decide who will represent them in Congress, or would we prefer to entrust that choice to a shadowy “resistance” coordinated by liberal activists, wealthy Democratic donors, and self-righteous Hollywood actors? My hope is that the people of Georgia, who have chosen rightly so many times in the past, will do so again.
Posted by Nicholas Waddy at 9:10 AM