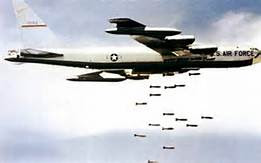 Hi again.  I promised you another analysis of President Trump's principled stand against North Korea, and here it is.  It's already been published in the Olean Times Herald, but I don't have a link for it as yet.  Enjoy!


To those who consider President Trump a belligerent buffoon, the title to my article will naturally come as a surprise. What these Trump critics fail to realize, however, is that adopting a threatening and forceful posture, as Trump has done in recent days with North Korea, is a time-honored tactic of diplomacy and negotiation, and President Trump is nothing if not a skilled deal-maker. He understands, as the press seems not to, that sometimes the only way to avoid war is to convince others that you are prepared to fight. This maximizes the pressure on your enemy to make concessions. And, I would argue, at this juncture concessions on North Korea's part are the only way that peace can be maintained in East Asia.


A history lesson is in order. President Richard Nixon is now regarded as one of the most brilliant and accomplished Presidents in terms of his management of foreign policy. During his Presidency, however, he was routinely derided (by sanctimonious liberals) as a madman and a warmonger. An excellent case in point would be the “Christmas Bombings” of December 1972. With tremendous difficulty, earlier in 1972 Nixon's National Security Advisor, Henry Kissinger, had negotiated a peace agreement with communist North Vietnam to end the Vietnam War. By the end of the year, however, the North Vietnamese were wavering. In mid-December, President Nixon ordered a massive bombing campaign against the North, involving waves of B-52 bombers. His aim was to pressure the North Vietnamese to resume talks and accept a compromise settlement. His actions were roundly criticized as bloodthirsty and callous. Weak-kneed leftists around the world rallied to defend the communist North Vietnamese. President Nixon's bold gambit succeeded, however: the North Vietnamese returned to the negotiating table, and the peace agreement was signed in January 1973. The Vietnam War ended, and on terms largely favorable to the United States. (It was only after President Nixon's resignation that the North Vietnamese resumed their campaign to conquer the South.)


What can we learn from this Nixonian parable? The enemies of the United States are tough customers. They do not respond to mealy-mouthed platitudes. They respond to force, and to the threat of force. They act out of self-interest, and therefore an America that is unwilling to threaten the vital interests of its enemies is an America that those enemies will surely not take seriously. President Trump may now stand condemned in the mainstream media as a loose cannon, and as a swaggering fool, but he should know that great Presidents that have come before him, like Nixon and Reagan, have borne the same type of abuse, and for the same reasons, and with the same scant justification. President Reagan's Cold War strategy of “Peace Through Strength,” which sought to build up U.S. military forces to counter Soviet aggression, was a legendary success. Many historians believe that it paved the way for the West's victory in the Cold War a few years later. But where would the world be today if President Reagan had listened to his over-refined leftist critics – if he had curtailed the U.S. defense buildup and gone hat-in-hand to the Soviets, begging for mercy? The mere thought is chilling.


Because North Korea's possession of nuclear weapons, and the capacity to deliver them to the United States, is utterly unacceptable, this means there is only one way to avoid confrontation between our two countries: North Korea must relent, and it must give up its ICBMs and its nuclear arsenal. The only way this can happen, though, is if the North Koreans become convinced that the alternative to capitulation is obliteration. In other words, U.S. threats of military action must be credible, and they must be credited by China and North Korea, in particular. That China recently voted in the U.N. Security Council in favor of the toughest ever sanctions against North Korea proves that they take U.S. threats seriously. That, at least, is a start. It is also, incidentally, a victory for the U.S. at the United Nations that the pusillanimous Obama administration never could have achieved.


The next time President Trump brandishes the sword against North Korea, therefore, and the next time he promises “fire and fury” to anyone who attacks or threatens to attack us, our allies, or our interests, Americans of all political persuasions should not criticize him; they should praise him. We should all pledge our full support to President Trump and to the soldiers, sailors, and airmen who may be called upon to implement a military response to North Korean aggression. We should do so not only because it is the right thing for patriotic Americans to do, but also because a united front against North Korea, and a demonstration of our granite resolve, is the only way to convince Kim Jong-un and his henchmen to come to their senses. We must be ready for war, in short, because it may well come, but also because our very readiness for battle may be the only hope we have to avoid it.


President Trump understands these foreign policy truisms better, it seems, than many of the “experts”. Let us hope and pray that he will stay the course and apply whatever pressure is needed to safeguard the American people from North Korea's nuclear weapons.
Posted by Nicholas Waddy at 1:33 PM