The World As We Know It 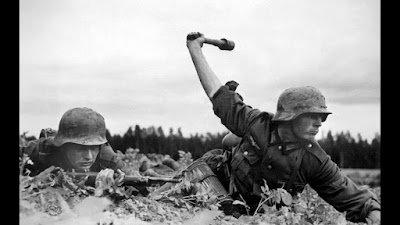 Friends, it was 80 years ago today that World War II began with Germany's invasion of Poland.  The world would never be the same.  The Second World War was instrumental in creating the conditions for the Cold War (that decided the fate of tens of millions laboring under Marxist tyranny), fostered the technological innovations that would both kill millions and eventually improve and protect countless lives, and revolutionized mindsets, ushering in modernity, for better or for worse.  Take a moment today to contemplate what an earth-shattering development Germany's offensive against Poland was.  Ponder also the vagaries of fate.  Germany looked invincible in the fall of 1939, and it very easily could have won the Second World War.  And yet it didn't win.  On the contrary, six years later Germany was shattered, and the Soviet Union and the United States were riding high.

In other news, the German "far-right" has won more votes than ever in regional elections in Germany.  The AfD is a party that opposes immigration from the Middle East and has been labeled in consequence "radical," "extreme," and "far-right".  Every other party in Germany has promised not to work with the AfD.  In effect, it's been shunned.  Now, I'm no expert on the AfD.  I'm sure there are elements in it that are odious.  Be that as it may, I also know that the Left is constantly working to de-legitimize the right.  Conservatives are always, in their eyes, "far-right".  From their perspective, you can't criticize immigration, or illegal immigration, and be anything other than a "white supremacist".  As conservatives, we need to defend ourselves from these smears, and we need to be alert to the standard tactics of liberals.  Above all, they want to paint everyone on the right with the broad brush of prejudice and hate -- and it simply isn't fair or accurate.

Finally, Sleepy Joe is at it again, generating "gaffes" at an alarming rate.  His latest statements, though, evoke a common liberal assumption: that "immigrants", including illegal immigrants, are actually morally superior to American citizens.  They work harder, they are more law-abiding, they cherish their families more, and they love this country more strongly.  As a result, we mere citizens have no moral authority to criticize them or to deny them their "right" to be in this country.  It's all nonsense, of course.  Immigrants, and illegal immigrants, are people, not demi-gods.  Some are admirable human beings, some are despicable human beings, but that was never the point.  The point is that a country of laws has the right to decide who can and can't live and work here.  We, the American people, get to make those decisions, not the "immigrants" themselves.  Never forget that!