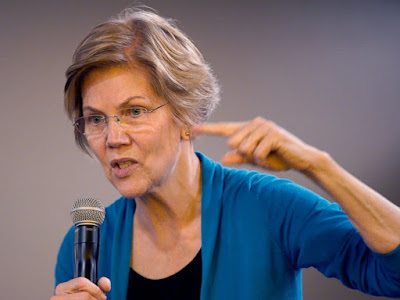 Friends, several recent polls are confirming what political soothsayers have been predicting for a while: Elizabeth Warren is becoming the woman to beat in the race for the Democratic nomination for President in 2020.  Two polls now put her ahead in Iowa.  That's big!  Iowa is the first caucus state in the nation, and it sets the tone for the rest of the race.  A win there can give a candidate the precious momentum to triumph in New Hampshire, South Carolina, and beyond.  Note to the Democratic establishment, therefore: if you truly want a moderate like Joe Biden to be the nominee, then you had better start sharpening your knives, because you're going to need them.  So far as I am aware, no candidate or outside group has yet run a negative ad in this race.  That tells you something, because negative ads are, whether we like it or not, the lifeblood of American politics.  You can't win any race without taking it to your opponent and driving up his or her negatives, especially when your opponent is the darling of elite journalists, as Liz Warren is, let's face it.  Pete Buttigieg recently observed that Warren's expensive proposals are not backed by a realistic plan to pay for them.  Duh.  That's an understatement, Pete.  Warren's ideas are all pie-in-the-sky.  Biden started to make this point as well in the last debate.  What's more, Warren has embraced a whole series of far left positions -- essentially out-flanking even Bernie Sanders, the socialist -- which will make her vulnerable as a general election candidate.  No wonder the national polls that show Biden trouncing Trump show Warren under-performing.  She's a dreadful choice for Democrats...which leads me to wish her all the best!