The (Brexit) Allies versus the Axis of (Remainer) Evil? 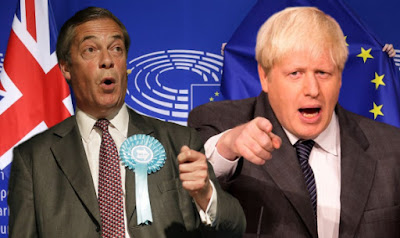 Friends, the political establishment in Britain is doing its best to throw Brexit into the dustbin of history, just as the "Swamp" is working hard to send the Trump family back to New York City (and preferably to Rikers Island).  Boris Johnson, though, Britain's courageous Brexiteer P.M., has an ace up his sleeve: Britain is (nominally, at least) a democracy, and that means that the people get a say!  Right now the rebel Conservatives, Labour, the Greens, the Scottish Nationalist Party, and the Liberal Democrats are all conspiring to prevent a quick election, because they fear Boris would win it.  It will happen, though, probably by November, and all parties must begin to consider their strategy for victory.  It would seem that the Conservatives are embracing Brexit more strongly than ever before, and as a result an opportunity has arisen to form an alliance between Nigel Farage's Brexit Party and the Conservatives.  Such an alliance would be formidable, especially as the two strongest opposition parties, Labour and the Liberal Democrats, seem far apart on many issues and look set to divide the Remainer vote between them.  I endorse a pact between the Conservatives and the Brexit Party wholeheartedly!  Indeed, I would love to see old Nigel in Boris's next cabinet.  Can you imagine the horror that would cause among the globalists and the elitists?  I can!  Bring it on!