An Impeachment Fake Out? 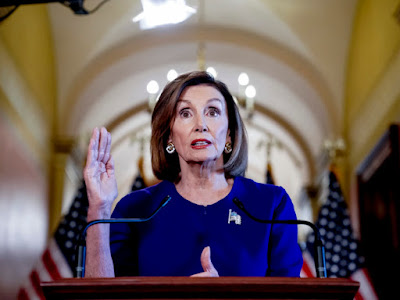 Friends, there was a remarkable confluence of events today.  One, President Trump's approval rating reached a two-year high.

Trump has shown a remarkable ability to prosper politically even as Democrats and the media hit him with everything they've got.  Case in point: the phony whistleblower scandal, which is currently the talk of the town in D.C.

Nancy Pelosi today announced the start of a formal impeachment inquiry, and the main justification appears to be the whistleblower's accusations.  Keep in mind that Congress has not yet seen the whistleblower's complaint, it has not yet spoken to the whistleblower, nor has it read the transcript of the all-important phone call between President Trump and the President of Ukraine.  Nevertheless, Congress is already prepared to launch an impeachment inquiry, and to imply strongly that Trump must be guilty.  Ridiculous!

Before you get too worked up, however, keep in mind that the House has arguably been engaged in an "impeachment inquiry" ever since January 2019, when the Democrats took control.  Pelosi has shied away from calling it that, but other Democrats have been clear that impeachment is in play.  Pelosi is under great pressure, moreover, to move ahead with impeachment.  It is an immensely popular idea with Democratic voters and with liberal Democrats in Congress.  Even if the Democrats know that the removal of President Trump is unlikely, most of them would like to impeach him anyway -- for the sake of tarnishing his reputation, one assumes, and demonstrating Congress' contempt for him.  You would think, however, that moderate Democrats would want no part of impeaching the President, since such an extreme move could easily backfire, especially given the unpopularity of impeachment with independent voters.

So what's happening here?  Do the Democrats really believe that the President's conversation could be the "smoking gun" that will finally win over Americans, including Republicans, to the idea of removing Trump?  Maybe, but they would have to be rather naive to believe that Trump, who has survived a thousand slings and arrow up to now, is suddenly vulnerable.

The other possibility, which I believe is more likely, is that this impeachment announcement is yet another fudge on the part of the Democratic House leadership.  Under pressure to breathe the word "impeachment," they finally did so, but without any firm conviction that Articles of Impeachment will or ought to be passed by the House Judiciary Committee, and without any intention of bringing the matter up to the full House for a vote. In this scenario, various House committees will investigate the President ad infinitum, and they will lavishly consider impeachment, but they will never quite get around to taking any action.  The smart money still says this is what will come to pass.

Make no mistake, however -- the Democrats are playing with fire.  The American people are increasingly sick and tired of a strategy of endlessly attacking and investigating President Trump.  Democrats are risking the very real possibility that a full-blown "impeachment inquiry" will help President Trump win re-election, and it may well help Republicans retake the House as well.  For that reason, today's announcement, although it may not seem so, is a win for the GOP -- and for America.

Lost in the shuffle of all the huge stories breaking today was this gem: major progress in reasserting control over our southern border.  Will the media give the President any credit?  The question answers itself...