The Impeachment Variety Show: Always Good For A Laugh 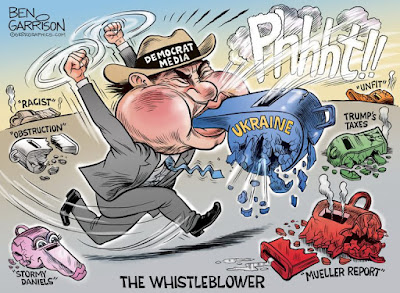 Friends, you can criticize the Democrats on many levels, but no one can say that they're not creative.  They've been beating the impeachment drum based on Russian collusion and obstruction of justice for years now, but along comes a story about Ukraine and -- what do you know -- all of a sudden, before the Democrats even see any of the underlying evidence*, it's the impeachment headliner!  I guess that tells you how thin the evidence was for all the other charges...  To say that the Dems are "desperate" to get Trump would be an insult to desperate people!  Be that as it may, the question arises: how seriously should we take the latest push to impeach the President?  Is he in any danger?

You already know my views on these questions.  There's virtually zero chance that Trump will be removed from office, and, despite the fulminations of Nancy Pelosi, AOC, the New York Times, and the Washington Post, there's very little chance that the full House will ever vote on impeachment, let alone approve it.  I explain it all in my latest article, coming soon to American Greatness:


On Impeachment, the Democrats Are All Talk and No Action

This week we've seen much breathless speculation in the media about how close the Democratic House of Representatives may be to impeaching President Trump. The answer to that question is straightforward: about as close as they were last week, and the week before — that is, not close at all.
How can this be? Didn't Speaker Nancy Pelosi declare in solemn tones that an “impeachment inquiry” is now underway? Don't White House reporters suddenly have a gleam in their eye that wasn't there a week ago? Yes, but...

In Washington, D.C., nothing is as it seems.

True, the Democrats practically wet themselves in their excitement over the news that, according to a so-called whistleblower, Trump may have “pressured” the Ukrainian government to investigate his potential opponent in the 2020 election, former Vice-President (and one-time Ukrainian policy supremo) Joe Biden.

Finally, the Democrats seemed to cry out collectively, we caught Trump in the act!
Indeed, they were so giddy that they decided not to wait for any of the underlying evidence to emerge before selecting the nuclear option of impeachment. Strike while the iron is hot, right? Better yet, strike before the iron is even chemically identifiable as iron.

Of course, the facts of the Ukraine matter do not, well, matter to Democrats nearly as much as the perception of wrongdoing that their bellyaching and finger-wagging can generate. By that inexact measure, indeed, Trump's conversations with the President of Ukraine are somewhere on the scale of malevolence between the Nazi terror bombing of Guernica and NBC's cancellation of Star Trek — in other words, really really bad.
Unfortunately for the Democrats, however, their brand of amateur political theater has long since worn thin. The American people are increasingly apt to view all politicians as self-interested and dishonest, including Democrats. Will a plurality of Americans support the impeachment of Donald Trump, therefore? Most assuredly. But a comparable number would probably support the impeachment of Nancy Pelosi or Chuck Schumer — which is merely a reflection of how polarized and embittered voters have become.

The point, though, is that this week's Ukrainian brouhaha changed nothing fundamental about American politics, or about the standing of Donald Trump in the eyes of the electorate. Trump's approval ratings are holding steady, or even ticking upwards. Support for impeachment is significant, but nowhere near a majority. Democrats are still salivating at every opportunity to give Trump a black eye, or worse, but independents and Republicans either like and admire the man, or they think Democrats should take a deep breath and let him get on with his job.

Likewise, Nancy Pelosi's bloviating about impeachment and how “No one is above the law” should be seen for what it is: it gives her seal of approval to yet more investigations of the President, but it does not make inevitable by any means actual impeachment proceedings. Impeachment, were it ever to come to pass, would involve the House Judiciary Committee considering and approving specific articles of impeachment, and the full House then voting on whether or not to approve them. If the House passed any one of those articles, then President Trump effectively would have been indicted by the House, and he would next be (assuming Mitch McConnell's cooperation) tried in the Senate. There is no reason, however, to believe that the Democratic leadership in the House is anywhere close to pulling the trigger on impeachment by bringing it up for a meaningful vote.

This may come as a surprise, when the media is reporting constantly that X number of House members “support” impeachment. What they mean, however, is that many House Democrats support...an “impeachment inquiry,” to borrow a phrase from Ms. Pelosi herself. In other words, Democrats can agree that they dislike Trump, and that they want to subject him to constant scrutiny and abuse, but beyond that any consensus on what should be done to or with the President breaks down. The number of House Democrats who would vote — today, on the basis of what is already known — to impeach the President is small. None of the developments of the last week have changed that simple fact.

President Trump and his supporters, therefore, should breathe a sigh of relief. The talk of impeachment has always been mostly hot air.

The Democrats will get only one chance to remove Donald Trump from the White House — in November 2020 — and, if they keep up their hyperventilating and their steady drift to the left, they will almost certainly blow that opportunity too.

And here's the American Greatness version:

*I encourage everyone to read the whistleblower's complaint.  That it was written by a team of anti-Trump lawyers is patently obvious.  That the man who nominally wrote it actually knew nothing of the events he describes -- and offered no evidence to support almost all of his charges -- is also clear.  The best response to this memo would have been to fire the Swamp Monster who wrote it.
Posted by Nicholas Waddy at 10:59 AM